Miami has been a magnet for wealthy South American home buyers for years. Now, developers are setting their sights on buyers from China.

The project is aimed primarily at international buyers, who have buoyed Miami’s red-hot condo market over the past three years.

Paramount isn’t alone when it comes to focusing on Chinese buyers. Overall, China’s share of international buyers of U.S. properties rose to 16% in 2014 from 12% in 2013 and 9% in 2011, according to the National Association of Realtors.

In Florida, buyers from Asia accounted for 8% of home purchases in the 12 months ending March 2014, up from 6% a year earlier, the trade group said in a July report.

To be sure, international buying in Miami-Dade and Broward Counties remains overwhelmingly dominated by South and Latin Americans. But the share of Chinese among international buyers doubled to 2% in 2014, according to a soon-to be released report from the Miami Association of Realtors.

“We hadn’t really focused on Asia before,” said Alyce Robertson, executive director of the Miami Downtown Development Authority, a group that courts investors to the city. “But we’re looking to the East now. Miami’s market is strong, so we need to catch up very quickly in terms of China.”

Art Falcone, the founding principal of the Falcone Group, one of the partners in the Paramount project, said he hoped to replicate in Miami the success with Chinese buyers he had at Reunion, a residential community at a golf course in Orlando. Over the past year, Reunion has attracted Chinese buyers for 50 of its first 150 presales. Those buyers have put down a total of $30 million in deposits on the project, Mr. Falcone said. Reunion is being developed by another company controlled by Mr. Falcone. 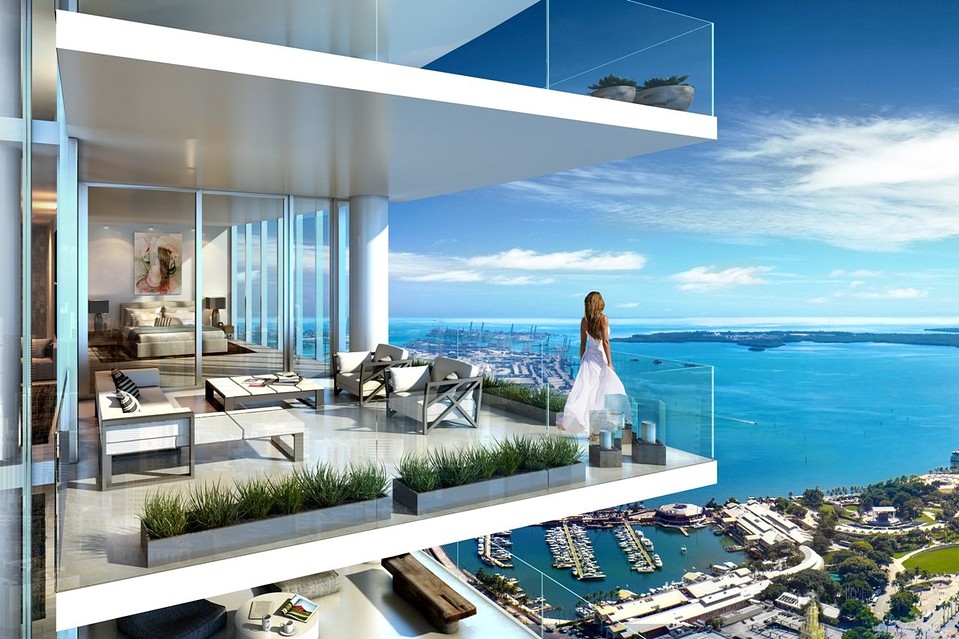 (Above) Rendering of Paramount, a 476-unit luxury condominium tower set to break ground early next year.

At Paramount in Miami, the plan calls for many of the trappings of typical high-end Miami condos: 10-foot ceilings, pools and living rooms that continue into floating decks. But Mr. Falcone also is hiring a feng shui consultant to design interior spaces according to Chinese custom and sending sales representatives to Beijing and Shanghai at least once a month to market the project. The developer plans to open a sales office in Shanghai early next year.

“We’re getting great traction out of China,” Mr. Falcone said.

One potential hurdle: Unlike gateway cities on the West Coast and New York, Miami has no direct flights to mainland China and no Chinese consulate. In November, the Miami Downtown Development Authority convened a forum including airport officials and local business leaders to discuss how to attract more Chinese investors, including home buyers.

Hong Kong developer Swire Properties , which is building a $1 billion mixed-use development known as Brickell City Centre, anchored by Saks Fifth Avenue and including apartments and a hotel, is owned by the same company that owns Cathay Pacific Airlines , one of the main U.S.-China air carriers, and participated in the forum. Swire didn’t return email requests seeking comment.

The $440 million Paramount project is part of the $2 billion, 27-acre Miami Worldcenter project, which includes a new Marriott Marquis hotel and a shopping center built by Taubman Centers Inc. and the Forbes Company, to be anchored by Macy’s and Bloomingdale’s.

Mr. Falcone began buying land in downtown Miami about a decade ago, using money he earned from the sale of his old home-building company, TransEastern Properties Inc., which he sold for $850 million to Technical Olympic USA Inc., a builder that later went bankrupt. He said he assembled parcels bought from more than 40 sellers and invested more than $100 million of his own personal fortune in the project.

CIM Group owns more than two-thirds of the Worldcenter project. The development team expects to announce early next year the brand name of a hotel to be built by developer Harvey Hernandez ’s Newgard Development Group, a Miami-based company that also is planning a 250,000-square foot office tower at Miami Worldcenter.

“The Chinese are not 100% sure what Miami is. They don’t understand it yet,” said Peggy Fucci, chief executive of the brokerage OneWorld Properties, which is marketing the Paramount project at Miami Worldcenter. She said she has been traveling to China once every few months to hold presentations for brokers and potential buyers set up by personal financial advisers with high-net-worth clients.

“When Chinese buyers come to Miami, I want them to identify the city with this building.”

Article from Robbie Whelan with The WSJ